Our days are getting warmer.  The spring equinox is set to fall 37 days from today.  Our annual Chinese New Year party happened last weekend.  I want to start a garden (I dreamed we were planting seeds last night!), go hiking in the canyon, have a Sunday picnic in the back yard.  When I lived in California, a favorite birthday tradition (it falls at the beginning of March) was to go plant shopping.  And of course, the number one thing I like to dream about when the days leave behind the bitter cold…is camping.

Our road trip to California last summer afforded us many camping opportunities.  Yes, I have camped in New Mexico and Arizona before.  Yes, I’ve camped many times in Big Sur.  But NO-even after living 32 years in the state of California-I had NEVER camped at Yosemite National Park! 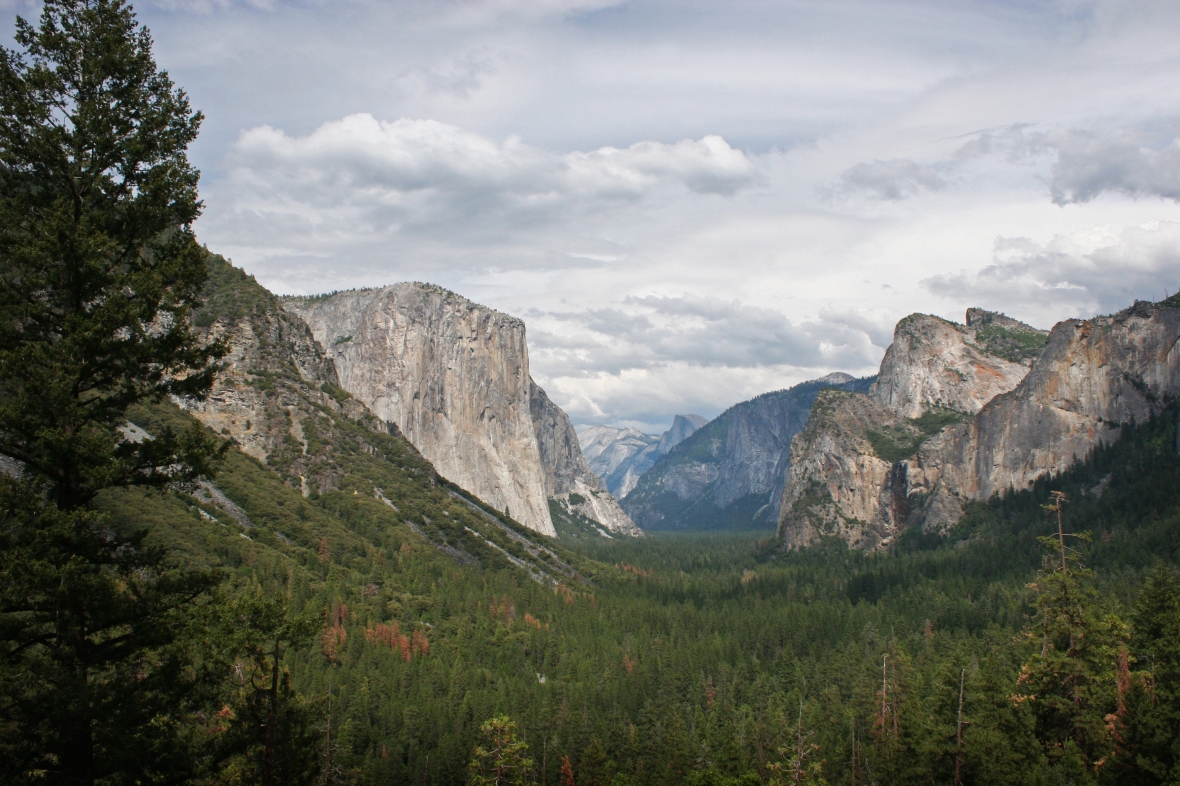 John Muir described it this way in his journal:

“Yosemite Park is a place of rest, a refuge from the roar and dust and weary, nervous, wasting work of the lowlands, in which one gains the advantages of both solitude and society. Nowhere will you find more company of a soothing peace-be-still kind. Your animal fellow beings, so seldom regarded in civilization, and every rock-brow and mountain, stream, and lake, and every plant soon come to be regarded as brothers; even one learns to like the storms and clouds and tireless winds. This one noble park is big enough and rich enough for a whole life of study and aesthetic enjoyment. It is good for everybody, no matter how benumbed with care, encrusted with a mail of business habits like a tree with bark. None can escape its charms. Its natural beauty cleans and warms like a fire, and you will be willing to stay forever in one place like a tree.

I couldn’t have said it better myself.

My in-laws were awesome enough to secure 2 camp spots for our families (reserve early, otherwise you’ll have to pack up camp and move mid-day because 2 nights weren’t available at the same site!) in the upper pines campground.

I had no complaints about the morning view from the tent: 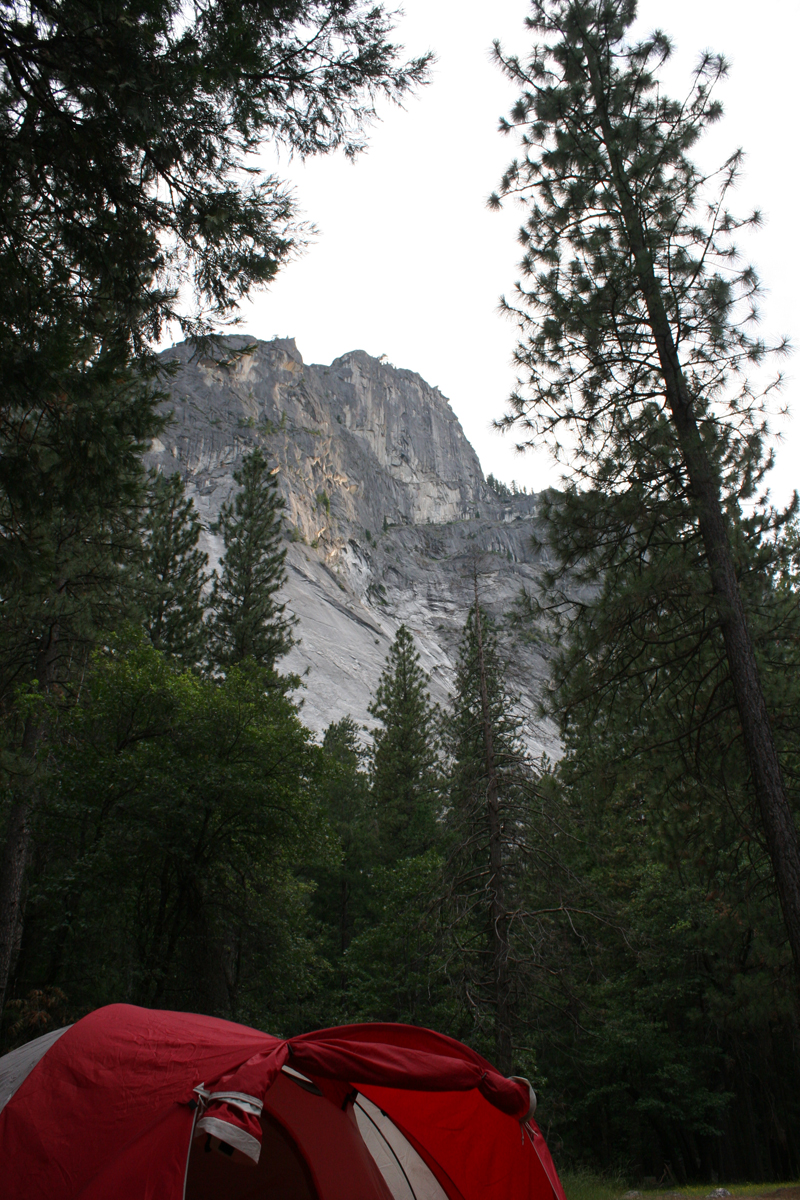 “It was like lying in a great solemn cathedral, far vaster and more beautiful than any built by the hand of man.”

Yosemite allows dogs, but Sprockett was not allowed on the Vernal Falls trail, so Matt stayed back at camp with his sister and youngest niece, while my mother and father-in-law, my other niece and I went on the hike.  (Matt had been before and I was chomping at the bit for some exercise).

We climbed some STEEP steps! 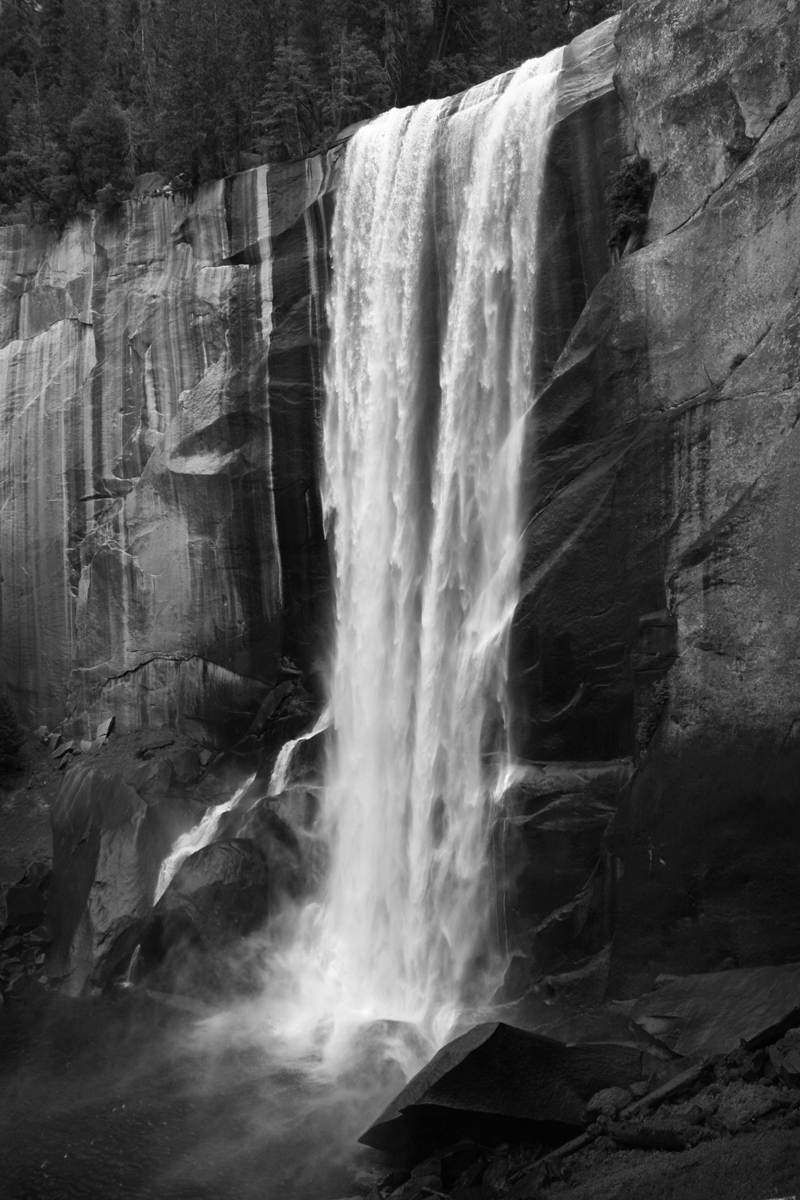 And some more steep steps…

And finally the top! 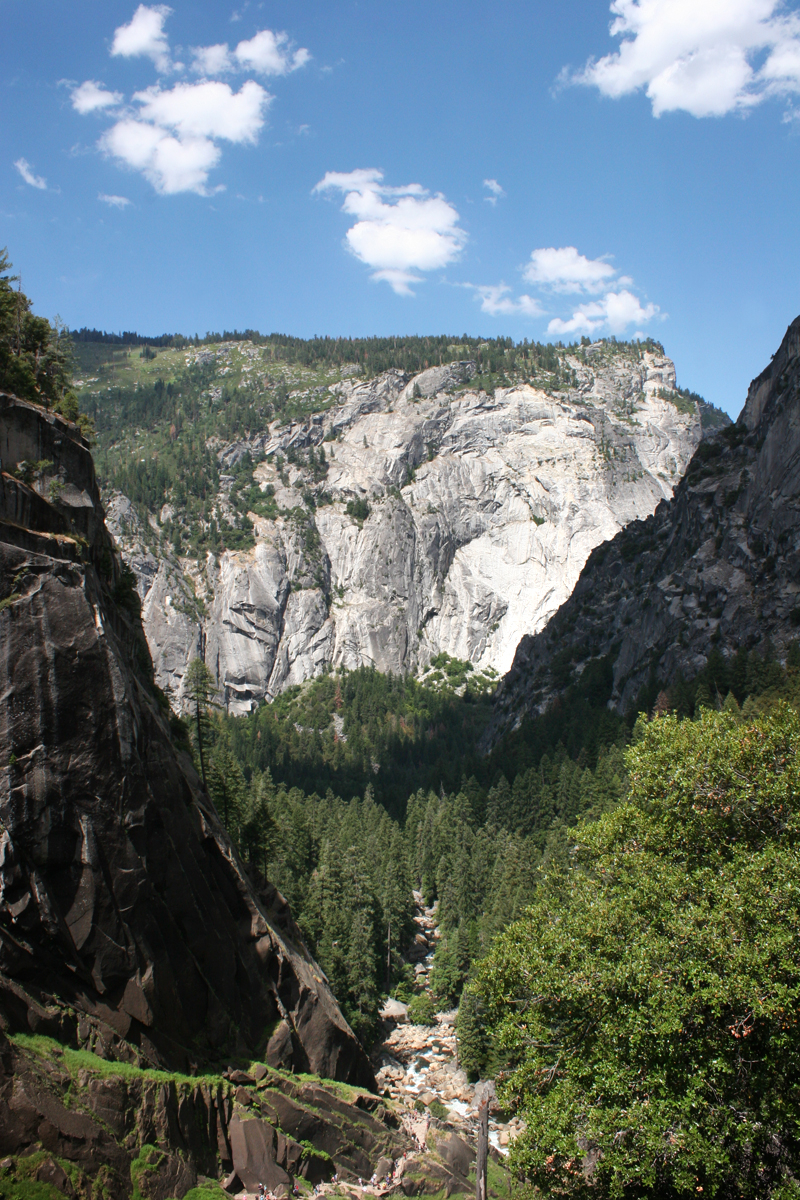 See all the tiny people down below?

We went just beyond the top of the falls to another little bridge with some nice views.  I think the sign said it was another quarter mile. 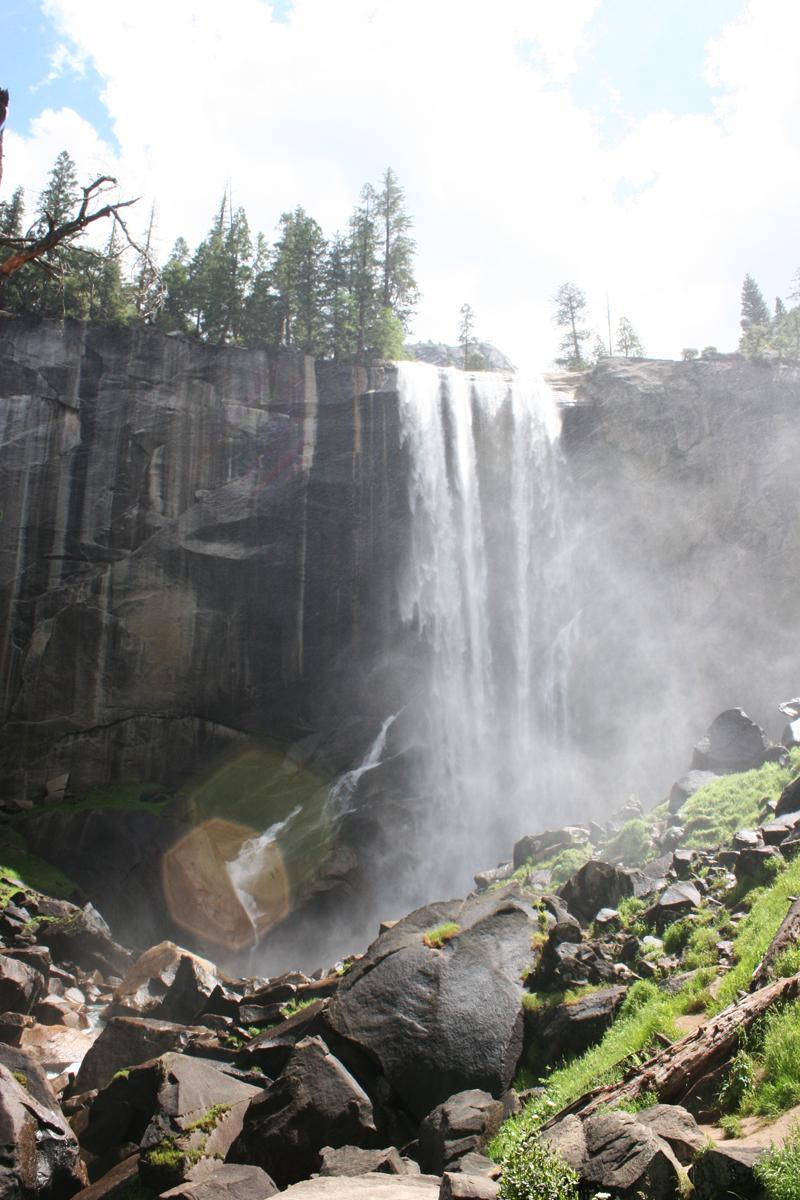 We barely made it back to camp in time to gather our stuff and move it to the other site.  (yes, you can empty a tent and walk it across a campground without dis-assembling it!) 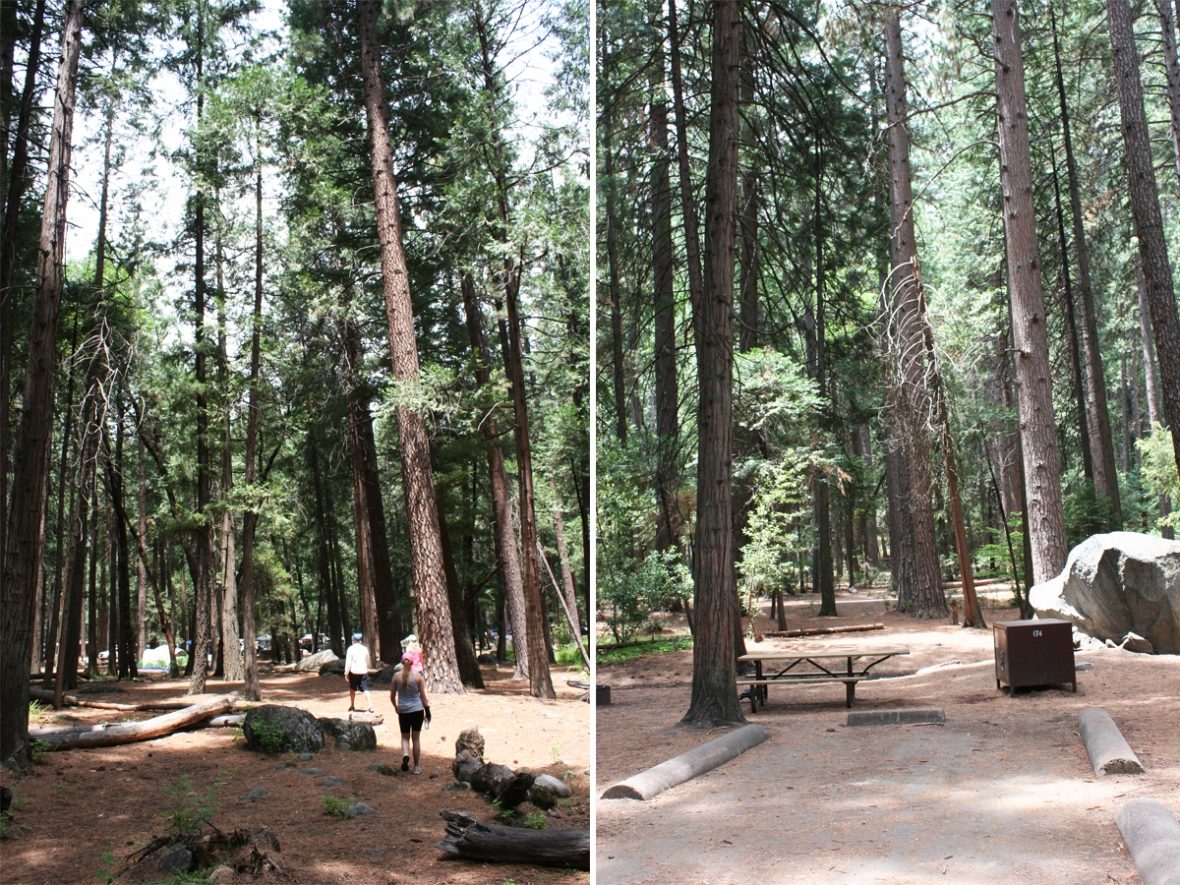 The second night we camped directly beneath the trees, in a spot close to a stream and the footpath to Curry Village.  We spent the rest of our free time exploring the historic Ahwahnee Hotel…

…admiring the valley and watching rock climbers do what they love.

There were plenty of opportunities for family photos, which is what the trip was REALLY all about 😉

Here is some travel info for you if you’d like to check out Yosemite:

Yosemite National Park charges (as of July 2015) $30 per vehicle for an entrance fee which is good for 5 days; camping fees are separate.  We only camped 2 nights and it really wasn’t long enough.  If I went back, I’d want to stay at least 5 days!

We camped in Upper Pines Campground, which was very nice.  I also thought the lower Pines camp area was beautiful (like any of it is going to be ugly!)

There is a a general store in Curry Village where you can buy all things touristy, as well as necessities.  We bought beer and ice and it didn’t seem to be highway robbery as far as prices were concerned.  However, we DID look into renting a raft for an afternoon (not a guided tour) and they wanted to charge something crazy, like $30/person.  We opted for beers on the shore and a swim instead.  Take some cheap inner tubes or a raft and save yourself some money.  Also, they DO rent bikes, but I imagine that would be expensive too.

The Ahwahnee Hotel is an historical site you should see while visiting.  We wandered around and I found the old photographs of the area and hotel to be most interesting!
Although I didn’t make it to the Wawona, this historical landmark would be on my list upon the next visit.

If I went back, I would stay longer, take the bikes, try to plan a September or October visit (I imagine this place is ALWAYS busy, but probably a little less so in the “off season”) and probably leave our dog at home.  There ARE places where you can take your dog (developed areas, some campgrounds, Wawona Meadow Loop, Chowchilla Mountain Road, and Four mile and Eleven mile fire roads-NOT Four Mile trail in Yosemite Valley), but all the trails I would want to hit would be too much of a hike for our Husky and you are not allowed to leave pets unattended.  Delaware North at Yosemite operates a dog kennel in the valley for most of the summer.  Kennel info can be obtained by calling this number: 209-372-8348

Please leave tips and comments below for MY next visit, as well as anyone else who happens to read this.  Thanks!